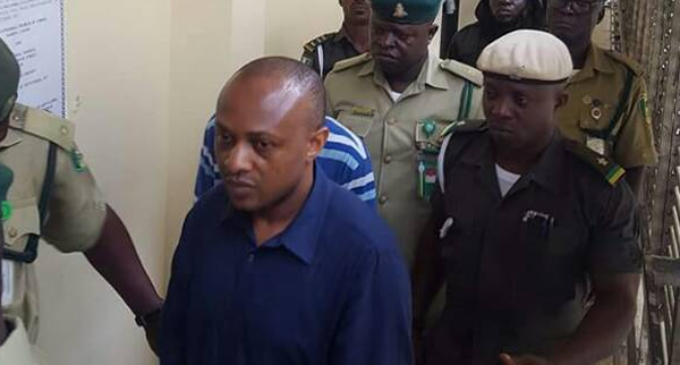 The convicts were charged with plotting to kidnap Sylvanus Ahanonu, a businessman, on June 23, 2014, in the Amuwo Odofin neighbourhood of Lagos.

Ahanonu, while giving his testimony as a prosecution witness, said his driver was waylaid by some men in police and military uniforms, who claimed to be officers of the defunct special anti-robbery squad (SARS) of the Nigeria Police Force.

“Evans came into my car brandishing an AK-47 rifle. He was wearing three-quarter jeans trousers,” he said.

Ahanonu added that his abductors contacted his wife three weeks after his kidnap to demand $2 million ransom or he would be murdered.

He said his wife was able to raise a total of $420,000 before he was released after two months in captivity.

However, Evans, who claimed to be in the transport business, denied the accusation.

He said the police forced him to admit to some allegations and sign incriminating documents.

Delivering judgment on Monday, the judge held that the prosecution successfully proved the case of kidnap and possession of firearms against the convicts.

“It has been established by the prosecution witness (PW3, Ahanonu) that the complainant was kidnapped. The question is who kidnapped him?” the judge said.

“PW3 identified the first defendant in court while he was giving his testimony. He also recognised him at the police station nearly two months before the matter was taken to court.

“He testified that he was blindfolded before taken to the bus. He said  ‘immediately I saw him, I said this was the person that kidnapped me’. I also watched the video where the first defendant admitted to have kidnapped PW3.

“The first defendant sat in a comfortable chair and there was no sign that he made the statement under duress. He was not threatened or harassed. He signed the statement.

“He also said how he broke into banks and later graduated to kidnapping. I am satisfied that this court can convict the defendants through his confessional statement.”

Additionally, the judge ruled that there was insufficient evidence to support the claim that three of the men who were with Evans were killed by police officers as alleged.

For Aduba, the second defendant, he was found guilty based on his confessional statement, and the judge ruled that he would serve out his sentence without the option of fine.

“I have considered the allocutus of the defence counsel. This sentencing will serve as a deterrent to others,” the judge held.

“The two are hereby sentenced to a five-year jail term for the first count, second count, 21 years, and third count, five years.

“The sentencing will, however, run concurrently. They are hereby sentenced to 21 years imprisonment without an option of fine.”

The development comes months after Hakeem Oshodi, an Ikeja high court judge, convicted Evans and two others on two counts of conspiracy and kidnapping.

On February 25, 2022, the trio were sentenced to life imprisonment.