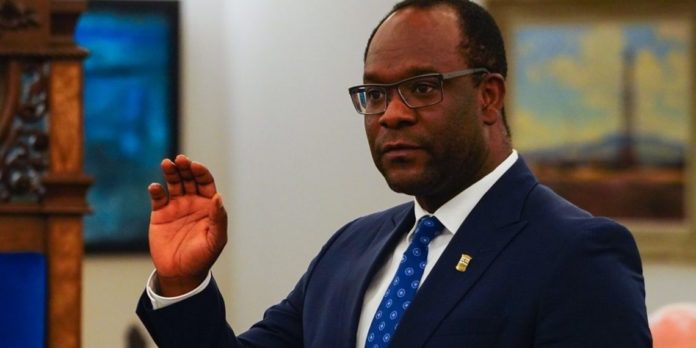 Nigerian-born Alberta justice minister, Kelechi Madu, has been asked to step back from his ministerial duties following a traffic violation controversy that happened in 2021.

Jason Kenney, the Premier of Alberta, Tuesday through his Twitter account, announced the decision to have Mr Madu step back from his duties.

“In the interim period, I have asked Minister Madu to step back from his ministerial duties,” he wrote.

Mr Kenney tweeted that he conveyed his profound disappointment in Mr Madu’s decision to contact the Edmonton Police Chief after receiving a ticket for a traffic violation.

Mr Madu has been accused of contacting the police chief, Dale McFee, to rescind the ticket after he was ticketed in March 2021.

He added that ‘’Minister Madu told me that he did not ask to have the ticket rescinded, nor was it his intention to interfere in the case, and that he promptly paid the ticket.’’

‘’I understand that Chief McFee has confirmed that at no time did the Minister seek to have the ticket rescinded. Nevertheless, it’s essential the independent administration of justice is maintained.’’

‘’That’s why I will appoint a respected independent investigator to review the relevant facts and to determine whether there was interference in the administration of justice in this case. Details about the independent review will be made public in the near future.’’

In March 2021, Mr Madu was pulled over and fined $300 for being on his cellphone in a school zone, CBC News reports.

Mr Madu phoned Dale McFee, the city’s chief of police, and discussed the violation with him.

“Minister Madu did contact me via the telephone concerned about a ticket. But just to be very, very clear, he never asked to get out of the ticket,” Mr McFee told CBC News in December, adding that he did not know exactly what was on the ticket.

Mr Mcfee said during the call, Mr Madu expressed concern about people of colour being stopped by police and, separately, political tension with the Lethbridge Police Service. At the time, the provincial government was preparing to step in after reports of unlawful surveillance and database searches conducted by Lethbridge officers on Shannon Phillips during her time as environment minister.

Mr Madu equally said in a statement that, “the officer indicated that he had observed me driving while distracted, alleging that I was on my phone. I disagreed, stating that I was not on my phone, as it was in an inside pocket.”

“Due to the timing of the incident, I wanted to ensure that I was not being unlawfully surveilled following the controversy surrounding the Lethbridge Police Service. I also raised concerns around profiling of racial minorities that was in the media at the time.

“Chief McFee assured me that that was most definitely not the case, and I accepted him at his word,” Mr Madu’s statement read, adding that, “I regret raising the issue at all with the Chief McFee.”