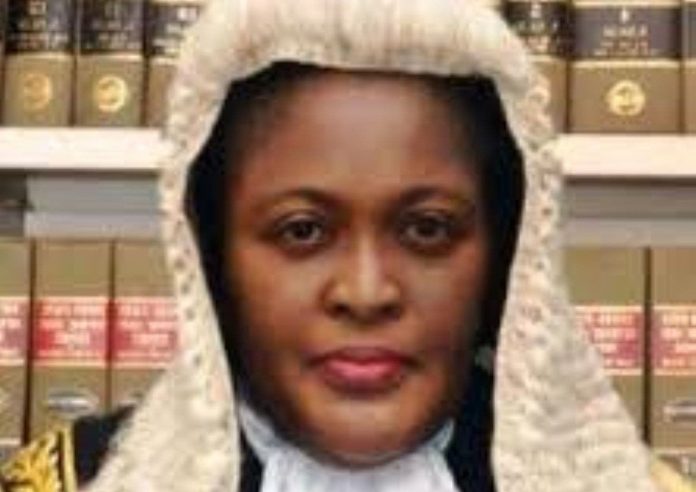 A Federal High Court in Abuja heard on Monday how a vigilant policeman foiled the planned invasion of the Abuja home of Supreme Court’s Justice Mary Odili by some individuals masquerading as government agents.

Assistant Superintendent of Police (ASP) Madaki Chidawa, who is attached to Justice Odili’s residence, gave details of how the incident happened on October 29, 2021.

Chidawa spoke while testifying as the first prosecution witness in the trial of 15 individuals (14 men and a woman) charged with various offences in relation to the invasion.

They include two lawyers – Alex Onyekuru and Igwe Ernest; a serving policeman – ASP Mohammed Yahaya and Hajia Maimuna Maishanu (the only woman).

Led in evidence by the prosecuting lawyer, Matthew Omosun, Chidawa said he has been a policeman for the past 29 years, 15 of which he has spent with Justice Odili.

Chidawa said he knew the defendants when they came to Justice Odili’s residence on October 29, 2021, claiming to possess a warrant to search the house.

“At about 1800 hours, I was on duty at the residence of my boss, Justice Mary Peter Odili, at No, 7 Imo River Road, when they, one CSP Lawrence Adjodo and others (the defendants) came to the residence.

“They said they want to search the house I asked, from where? They said they are from the Economic and Financial Crimes Commission (EFCC) Asset Recovery Panel, attached to the Ministry of Justice.

“Then, I demanded to see the document, They presented a search warrant, which I went through and found out that the search warrant was signed by a Chief Magistrate, FCT, Abuja

“I also discovered that the number of the residence on the warrant was written as No: 9 Imo Close. And I said this is not No: 9 Imo Close, this is No:7 Imo River Street, but Lawrence Adjodo said it was the same house that they came for.

“I went in to Justice Odili to inform her that some men came to the house to conduct a search. She then made some calls

“When I got back to the gate, where they were waiting, I was still insisting that this is No: 7, not No 9.

“They eventually did not conduct the search. Lawrence Adjodo said I have stopped them from entering the house but that they will go back and reinforce, giving the impression that they will use force.

“He (Adjodo) asked if I am doubting them. He gave me a number and I dialled it but the Trucaller showed ‘Ojo Ola, EFCC.’ I did not know the Ojo Ola, it was the number that Lawrence Adjodo gave me,” Chidawa said.

The witness said he later made statement to the police on October 31, 2021, which the court admitted and marked as Exhibit: PW1A.

Under cross-examination by lawyer to the 1st and 2nd defendant, Ahmed Abubakar, the witness identified Adjodo as the first defendant, who led the others.

He said Adjodo introduced two other of the defendants as Captains of the Nigerian Army.

When it was his turn to cross-examine the witness, lawyer to the 3rd defendant, O. J. Nwosu sought for an adjournment to enable him familiarise himself with the file.

Justice Evelyn Maha then adjourned till March 1 for continuation of the witness’ cross-examination.

Earlier, the judge granted bail to the remaining three defendants, who were denied bail last year when 12 others got bail.

ASP Yahaya, Adamu and Usman were granted bail conditional bail at N5million and two sureties each.