Gov. Kayode Fayemi of Ekiti State, on Tuesday, sworn-in four permanent secretaries, charging them to uphold the tenets and doctrine of anonymity and neutrality in civil service.

The governor charged them to see their appointment as a call to service and an opportunity to be part of positive history in the state.

Fayemi identified the civil service as the engine room, upon which the five pillars of his administration is hinged.

He commended the leadership of the state civil service for their doggedness as evident in the collective efforts against the dreaded COVID-19 pandemic.

The governor reiterated his commitment to transparency in corporate governance, saying that his administration has consistently filled vacant position through an “open competitive process”.

“The public service is the engine room of government with clear cut roles upon which the five cardinal agenda of this administration revolves.

“Hence, the need to put in the necessary human machinery to drive the process.

“I have no doubt that your antecedents in the public service have paved ways for you to be worthy of this position.

“Of course, since you were not selected via ‘Bet Naija’ or ‘Baba Ijebu’ lottery, I have no doubt that your meritorious qualifications would serve you well in office.

“In order to ensure competence and credible leadership for the civil service, this administration has consistently been filling all vacant position through an open competitive process,’’ Fayemi said.

According to him, the process is to ensure that the best hands are appointed to promote the policies and programmes of government and enhance the performance of the service.

“As public servants, you are agents of the people and you are expected to play your part in the development of the state.

“You are expected to conform to the principles of the public service in the discharge of your duties and you should ensure that discipline is professionally injected into the civil service.’’

The governor stressed the need to examine new ways of responding to future challenges of the civil service in the “new normal”.

He also announced the restructuring of some Ministries, Department and Agencies (MDAs) in the state.

This, he said, was to ensure “professionalism, inclusiveness and dynamism in the civil service’’ and to enhance efficiency in driving the developmental agenda.

He used the occasion to appreciate officers, who recently retired from the civil service in line with the extant public service rules, wishing them best in their future endeavours.

The event was attended by the Speaker of House of Assembly, Funminiyi Afuye, and members of the State Executive Councils. 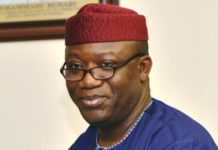