Rosula Foundation, an NGO, on Friday distributed palliatives to some residents of Lugbe community in Abuja, the Federal Capital Territory (FCT), to mark Eid-el-Kabir celebration.

Modupe Olatobosun, Head of the foundation told newsmen during the distribution that the gesture was to put smile on faces of the needy.

Newsmen report that items distributed by the NGO include rice, beans, semovita, spaghetti amongst others.

Olatobosun said the foundation felt that as Muslims celebrated the Eid-el-Kabir, there could be people that would not have anything to eat, so it decided to reach out to them.

“We can not feed the whole nation but we are giving the little we can to sustain them in this festive period.

“We are also appealing to other well meaning Nigerians to reach out to those who are unable to feed, no matter how little,”she said.

Olatobosun said that so far, the foundation had reached out to 18 communities in the FCT and planned to visit other states soon.

According to her, the foundation has been reaching out to the needy in the society, adding that the COVID-19 pandemic made them more prominent.

She said that the foundation’s gesture was in three stages – empowerment, education where they give out scholarship and humanitarian services.

Some of the beneficiaries told newsmen that they were grateful for the gesture as it would go a long way to ease their suffering.

Samuel Luka, a beneficiary thanked the foundation, noting that efforts to reach out to them on such special day was impressive.

Luka appealed to the government and other Nigerians to do same by reaching out to the poor.

Also, Mrs Helen Eze, another beneficiary thanked the foundation for reaching out to them as the palliative would assist in feeding her family. 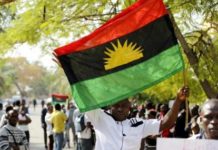 IPOB to retaliate killings in Bayelsa