The Minister of Information and Culture, Alhaji Lai Mohammed has been dragged before the National Industrial Court, Abuja, over the non payment of retirement benefits to an ex presidential award winner, Malam Yushau Shuaib.

The court had in a judgment on November 22, 2017 ordered the Federal Ministry of Information to pay retirement benefits to Shuaib but the order has not been effected.

In a motion filed at the court, the claimant wants the Industrial court to hold that refusal of the Federal Ministry of Information and Culture under Mohammed to pay the retirement benefits since 2017 court verdict constituted contempt of the court punishable with imprisonment.

The motion on notice filed by the applicant through his counsel, Mr. James Abah, is seeking an order of the court for the enforcement of the judgment delivered on November 22, 2017 against the Federal Civil Service Commission and the Federal Ministry of Information and Culture.

Specifically, Shuaib is praying the court to order the two respondents to immediately compute salaries, allowances and other emoluments due to him from July 2013 when he was unlawfully sacked as the Chief Information Officer in the Federal Ministry of Information and November 22, 2017 when court ordered his reinstatement.

He is also asking the court to compel the two respondents to present before the court, the total sum as computed in respect of the judgment which ordered payment of his salaries from the period he was unjustly sacked to the period he was lawfully reinstated.

The motion on notice brought pursuant to Sections 254 and 287 of the 1999 Constitution as well as Section 10 of the National Industrial Court Act, 2006 was predicated on eight grounds among which was that the court has power to enforce its own judgment and commit to prison any person whose action constitutes contempt of court.

No date has been fixed for hearing of the motion. 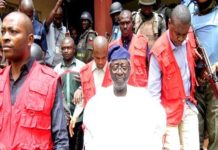