Nigeria and FC Nantes player is in celebration mood and shares with TAIWO ALIMI, his happy feelings following the arrival of his second daughter, the good life in France inspired by his most recent awards.

Fresh from celebrating the birth of their second daughter and hitting it off in grand style as Player of the Season in his first season with FC Nantes, Nigerian playmaker Moses Simon has described 2020 as a great year. This is in spite of the novel virus; Covid-19 that is ravaging the world. Simon said: “My family is celebrating because God has been kind to my family. 2020 has been a great year for us.” The Super Eagles sensation who missed the Russia World Cup by whiskers, said he has experienced great happiness in his family and career in his maiden season with Nantes in French Ligue 1.

Speaking from his base, Simon a.k.a ‘Daddy’ said his loan move to Nantes from Levante has proved to be a good one going by what he has achieved within a short time.

He said: “God has been smiling on me since arriving last summer in France. I met great guys here and I chose FC Nantes because I think I have a lot to learn here because there is a very competent coach [Christian Gourcuff]. My relationship with Kalifa Coulibaly is great, we met each other when we played at KAA Gent, it’s the first person I asked for information before signing, he told me good things and he did everything for me to sign here. I’m enjoying my stay here.”

The midfielder, who also functions well from the wing, was awarded Nantes Player of the Season after an impressive nine goals and eight assists in 30 appearances in the 2019/2020 season.

“As a player I never expected any nomination I was just doing my job as a professional player who has a contract to respect and honour and it ended up with an award. I will say it is a good feeling because of the effort I put in last season. I came to the league with determination to excel and at the end of the season God rewards me with Player of the Season in my first season with the club. So I feel great. 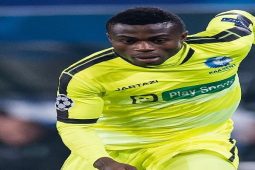 His goal against OGC Nice was also adjudged one of the best in the season and Nantes 25th Goals of the Decade. “One of my goals made the top 25 goals in a decade in French league. I am elated that I’ve achieved so much in my first year in FC Nantes. I’m happy that I’m living up to billing”

The goal was indeed awesome as he headed home inside the box from a high ball from the right. Simon headed down to bounce off the ball to beat the keeper that was expecting a straight one. The goal also secured a 2-1 win for Nantes.

He added: “2020 is no doubt a fantastic year in my football career where I played in some games as a top striker and I did not disappoint the gaffer who felt I could still be useful as a point man and as well as a winger. 2020 is worthy of note.”

“I feel so elated that everything worked for good for me in the French league, the arrival of my second daughter and as well the remarkable season I had in my first season with FC Nantes.’

Having been rewarded with a contract, Simon said he’s looking forward to the new season. “We have started training already, a rigorous one for that matter. We are preparing for the new season in France as the last season league was cancelled due to Covid- 19.

“French league has its peculiar nature and structure in terms of funding and organization, but I am impressed there are a lot of black players in the French league. My Super Eagles teammates are here with me; Samuel Kalu, and Victor Osimhen. I’ve played in the Spanish league which is regarded as the best league in the world and I think it is still the best league I have ever played.”

Simon believed his current form will give him another shot in the Nigeria senior team after helping to secure a World cup ticket to Russia only to miss the Mundial party when he cupped an injury few days to kick off. “Of course I am thinking of how to be part of the team again after several months of not playing competitive football for the country.  We are on course to qualify for the Africa Cup of Nations in Cameroon.”

He said he has unshaken faith in the team’s manager Gernot Rohr, whom he said inspired them to Russia 2018.

“I’m happy that Coach Gernor Rohr got a new contract. The coach deserves the new contract with his exploit with the Super Eagles. He took us back to AFCON with a match to go and qualified us World Cup too. I think the NFF did the right thing by extending his contract.”

Simon grew up in Kaduna where he kicked off his career on the streets like many top Nigerian players. He revealed that he was inspired by a local soccer hero, Joshua Obaje.

“I used to watch him while growing up and I appreciate him for his professionalism. I think at a point in time he became a source of inspiration to me and I looked up to him as we grew up in the same area in Kaduna.”

Obaje was a cult hero in the Nigerian league in which, he played for Heartland and Warri wolves before travelling to Algeria to play for ASO Chief. He was in Super Eagles Team B that finished third in the 2014 African Nations Championship CHAN.

My happiness lies in seeing my loved ones in good health and the reverse is the case when they are down. I don’t want to my see my loved ones down with illness or in situations they cannot help. 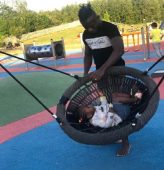 I have put that behind me. It affected me because I was good for that team and playing well too. The manager had a plan for me before the injury set in. It was sad moment I felt sad about it. It took me a while to take it off my mind and I know that I would have another opportunity. I knew I am young and playing well and I know the manager is watching.

Osimhen is a great guy and coming he’s one of the people that inspired me to come to France. He’s like a brother and upon my arrival, he called me and he told me he’s happy to have me here. I’m happy for him and know he would do well wherever he moves too. He’s a hard working player.

Simon made Nigeria’s debut on March 25, 2015 during an international friendly against Uganda, when he replaced Anthony Ujah after 59 minutes in the game. Simon scored his first goal for Nigeria in an international friendly against Nigeria on September 8, 2015, the second in a 2–0 win. He was selected by Nigeria for their 35-man provisional squad for the 2016 Summer Olympics. In May 2018, he was named in Nigeria’s preliminary 30-man squad for the 2018 World Cup in Russia. However, he did not make the final 23 due to injury. He was included in the country’s 23-man squad for the 2019 Africa Cup of Nations.

I am ready to give marriage a second chance – Toke...