TWO more aspirants from the anti-Godwin Obaseki camp have collected the Expression of Interest and Nomition Forms to bid for the All Progressives Congress (APC) ticket.

They are Chris Ogiemwonyi and Dr. Pius Odubu.

Others who have collected the forms are Governor Godwin Obaseki, Pastor Osagie Ize-Iyamu and Matthew Iduoriyekemwen.

Ogiemwonyi, a former Minister of State for Works, and Odubu, a one-time deputy governor had earlier congratulated Ize-Iyamu having been picked as consensus aspirant.

The governor on Tuesday said he was seeking re-election to change the face of politics in the Southsouth state.

He said service delivery remains his goal in the last three and a half years.

The governor urged the members of the Obaseki/Shaibu Mandate Forum (OMF), who purchased the Expression of Interest Form for him, to gird their loins.

“That is what we are about; to change that notion that politics is not the way it’s being defined, as a privilege for a select few. Politics is about service for the common good.”

The governor spoke as the battle over Edo APC primary moved to the High Court in Benin City, where his camp is challenging the guidelines on direct primary by the APC National Working Committee (NWC).

As the feud between Obaseki and National Chairman Adams Oshiomhole festered, a former Chief of Staff to the governor, Chief Taiwo Akerele, said dialogue is the way out of the rift.

However, the Peoples Democratic Party (PDP) said the conflict between Obaseki and another aspirant, Pastor Osagie Ize-Iyamu, will pave way for victory for the opposition at the governorship poll.

Obaseki said he deserved a second term because of his achievements.

The governor noted that OMF had gone through pains and made the sacrifice to purchase the form for him because they had observed his resolve to restore Edo’s glory through investments in developmental policies and programme.

The OMF had called on Edo indigenes in Lagos, Delta, Ondo, Kogi, Abuja, Kaduna and other parts of the country to approach the Independent National Electoral Commission (INEC) for the process of transferring their voter cards to Edo to facilitate Obaseki’s re-election 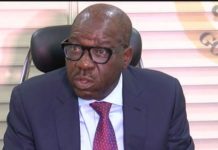