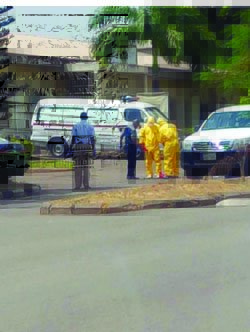 There was panic on Tuesday at the posh Games Village in Abuja following the evacuation of a woman and her three children suspected to have flauted the 14-day self-isolation directive.

The woman, who returned from the United Kingdom in the last two weeks, was also said to have observed the Juma’at Service at the mosque in the estate last Friday.

Most residents of the village remained indoors amid fears of more residents testing positive.

The National Centre for Disease Control (NCDC) and health authorities were said to have ordered the fumigation of the hospital in the estate where the woman and her children were evacuated.

But most residents were being advised to keep the evacuation under wraps in order not to cause stampede.

According to investigation by The Nation, the UK returnee had not complied with the directive of the Federal Government directive to self-isolate for 14 days.

It was learnt that the tempo of her activities had increased in the last two weeks in the village.

A top source, who spoke in confidence, said: “NCDC came with an ambulance to evacuate a woman and her three children who were found positive of COVID-19 at the clinic in the Games Village.

“The husband has also been referred to the appropriate centre for test. NCDC and the relevant health authorities have fumigated the hospital where the woman was evacuated.

“What happened really was that she travelled to the UK and returned about two weeks ago without being in self-isolation. We learnt she even attended Jumaat service at our main mosque last Friday.

“The immediate challenge at hand is tracing all her contact persons and how to detect how many people have been infected in the estate. We can talk of about 3,000 to 6,000 people living in the estate.”

A resident said: “The Federal Government must come to our rescue by fumigating this estate to avoid the spread of COVID-19.

“The truth is that we have been thrown into panic with most of us locked indoors because we do not have information on those under surveillance.

There are 600 units of Houses in the Games Village as originally designed for the Eight All Africa Games, which was hosted in 2003 by the administration of ex-President Olusegun Obasanjo.

But the population of the estate has quadrupled following the sale of the houses since 2005 with some of the buyers abusing the Master Plan by adding boys’ quarters to the units.