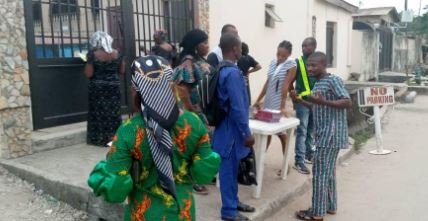 CHURCHES in Lagos on Sunday experienced a shutdown on activities following the directive from the state government that all religious and social gatherings should not exceed 50 persons.

Members were asked to go home, and some others were divided into sections, a number of them worshipping from the homes of members. The Nation observed that hand sanitisers were given to each member before allowing them into the premises.

According to a circular released by the Archbishop of Lagos, Alfred Adewale Martins, members were asked to remain in their houses.

The circular enjoined worshippers to “view this situation in the light that we are fighting a war, a war with an invisible enemy with weapons that are dangerous to human lives.” They were also instructed to connect to Lumen Christi on DSTV, set up altars for themselves at home and pray the rosary, as an end to the coronavirus pandemic is looked forward to.5

A security guard at St. John the Evangelist Catholic Church, Ladipo-Sogunle, Lagos, speaking to The Nation on conditions of anonymity, said that it was impossible to hold service as it would be difficult to select 50 persons to each service.

“How do we select 50 persons to enter each mass? It is impossible to do so, and as such, it is better not to hold services till this issue dies down,” he said.

The Redeemed Christian Church of God,  Place of Refuge, Ladipo-Sogunle had only 30 members  at the service  when The Nation visited. There was however no sanitiser given to members hand.

A Pastor in the Church, Oloruntoba Ayodele, explained to The Nation that the reason church services were holding was because “it is not every member that belongs to a house fellowship, and again some people come from far away, and so, we have to hold the service in church.