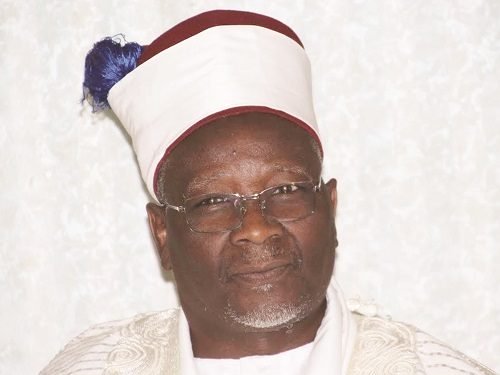 Machina is one of the remotest towns in Yobe State. Located about 300 kilometres north of Damaturu, the state capital, it is an emirate that prides itself of a rich cultural and historical background.

One of the unique things about the historical town is that snakes and human beings are friends and do not harm each other.

It is not clear when the fraternity between Machina Kingdom and snakes began. But one thing that is very clear is that the people of the kingdom do not joke with the relationship or take it for granted.

The enmity between man and snake may date back to creation, but the people of Machina are not ones to ever harm a snake.

At his palace in Machina, the Emir, Alhaji (Dr) Bashir Albishir Bukar Machinama, OON, explained the origin of the fraternity and the consequences of violating it in an interview with our correspondent.

He said: “The fraternity between human beings and snakes is one of the many things people want to know about Machina. It is based on some historical facts.

Our parents used to tell us that snakes are not killed in Machina because in this palace, there was a time one of the Emir’s wives gave birth to a human being and a snake, and the snake stayed for about 3 days in the palace.

“Because it could not cope with human activities, it crawled into the rocks. You know the palace is just near the rocks. So as we human beings have generations up to my own age and maybe my children, grandchildren great grandchildren, we thought also that snakes too have their generations and we have a relationship with them.

“People should not misunderstand this. I am not the person who was born with the snake. Neither was it my father or my grandfather. But it was one of the rulers of Machina.

“If we are celebrating, no matter what type of celebration, whether it is naming ceremony or there is going to be a birth in this palace, sometimes we see snakes coming out and we would wonder what is happening and pray that it is a thing of joy not of sadness.

“So if we are going to experience something good or bad, snakes will come out. And there have been many occasions when snakes came out to celebrate with us.

“Normally, when you come, you might not see them. But sometimes if you are lucky, you will see them moving around the palace.

“There is a place I normally rest in the evening; sometimes snakes will just come under my chair, stay for some minutes and go. They will not do any harm. They will just move round and round and go. That is why we consider snakes as part of us, our blood relations. So, we don’t allow people to kill snakes in Machina.”

Asked if there are consequences for killing a snake in the town, the Emir said: “I can give three instances that I am a witness to. We had one gentle man who was at his tender age.

They were clearing farm with my father just behind the rocks. A snake came out and the gentleman took a stick and killed it.

Then all of a sudden, he started shivering and he was rushed to his house. At sunset, snakes started trooping into the gentleman’s house to the extent that he could not sleep in his house that night.

“His body became weak as if he had no bones in it, and he started crawling like a snake, moving his tongue like them.

“They came and reported the incident to my father. My father ordered that the young man should be brought to the palace. He was brought into the palace and they gave him some medicine, prayed and begged for forgiveness. He recovered and after some weeks went back to his house.

“But one thing is that whenever that particular period of the year comes, the gentleman would fall sick and would not get better unless they gave him the medicine.

“Since he was like a house boy to my mother, the medicine was put under the custody of my mother. Anytime he fell sick, they would just come to my mother, get the medicine and go administered it on him and he would be fine again for the year.

“Up until the period when my father died, he was suffering from that illness for over 40 years, and I continued with him. I appointed him as one of my village heads. He was posted to Karigide village.

“Even in Karigide village, once that season comes, he will fall sick and luckily, my mother is still alive. She would send the medicine to him, and once he took it, he would be okay again.

“About three years ago, he died and we appointed his son to the throne of the village head. So this is one typical example of killing snakes and its consequences.

“In the second instance, my father bought a tractor for farming and employed a driver from Jigawa State. That driver came with his family and settled in Machina. He married another woman from Machina, so he had two wives.

“The one he came with was at her tender age, so she was not out of giving birth. One afternoon, a snake came into their house and they were shouting, ‘Snake! Snake!’ Then the woman from Machina said they should forget about it, that it would not harm anyone.

“But the husband and the older wife said how can we be living in the house with snakes? Before they could do something, the snake had already entered a hole in the house.

He ordered his wife to boil water. With the help of his pregnant wife, the one he came with from Jigawa, they poured the hot water in the hole where the snake entered.

“When the wife gave birth to a baby girl, the baby she gave birth to was as if she had no bones in her body. She was just like a snake. She stayed up to 14 or 16 years before she died.

“When you heard her speaking behind the scene, you would think it was an able human being. She could speak with her mouth, she could hear and see, but she cannot use her hands and legs. If she must move, they must use a basin to carry her up until that age or she would just be crawling like a snake.

“That is another example of the implications of killing snake in Machina.

“In the third instance, there was a time, just about sunset, a snake came out from that gentleman’s house and they were shouting snake! Snake! The family said, ‘Leave it; it won’t harm anybody.’

“You know about snake charmers. The man thought he had charms and he could do anything with snakes. He started following the snake. As the snake ran up to the outskirts of the town, he matched on the snake’s tail to take it.

“But just as he was about to pick it, the snake retaliated and bit the snake charmer. The man rushed to his master for rescue, and he was given oral medicine and the one he would use to bathe. But before he could even remove his clothes in the bathroom, he gave up.

“These are the three typical examples of the implications of killing a snake. So a snake does not harm anybody if you don’t touch it. And it is dangerous for someone to touch it or try to kill it. If you don’t touch it, it will go its own way and you will go yours.”

But what happens if you are a stranger and mistakenly harm a snake?

To this, he said: “Well, in most cases, the state of nature made certain animals in such a way that once you see them, you will have fear for them. Immediately you shout snake, snake, people would say leave it.

“So you will get that particular notice unless it is on the outskirts of the town. You know Machina has developed beyond its boundary. Where the snakes are is within the old city and near the palace.

“The more they grow, the more they change their colours from this whitish silver colour to brownish to black and the rest, so we don’t kill them.

“And then there are certain species normally that are dangerous to be killed because they are not harmful, but we don’t have such cases.

“In most cases, anybody who comes to Machina, they know that snakes are not killed in Machina.

“So we don’t have that experience of killing snakes by accident. But doing so intentionally, it is very dangerous.”

How then would visitors to Machina know about the taboo of killing snakes if they are not sensitized?

“Well, we don’t tell them. But one thing is that many people are aware of it. If you asked we will tell you the story. But if you don’t aske, we don’t tell the story, and people who stay in the town they would hear people saying they don’t kill snakes in Machina.

“They may hear the story before even getting to Machina. Most people who come to Machina know the story.”

But how old is this tradition of fraternity between snakes and human beings in machine?

“Out of the 77 traditional leaders, only one is not from our blood linage. He was brought from Damangana Zingri in Niger Republic when the Sultan of Zingri came surprisingly and captured Machina Nguru and some part of Potiskum area; that is Mai Potiskum area.

“So the leader of Machina was taking to Zingri for six years. Then later he was freed and came back and took over his leadership. And that was my father’s grandfather, Maina Maila Idrissa. So that was the only person whose tenure had two breaks.

“He ruled Machina in three subsequent times and later died on the throne, and his son, Mai Ali Idrissa, inherited the throne and later my father Mai Bukkar Aliyu Idrissa, then myself. So out of the 77, only one is not from the linage of the founder of Machina.

“So, this year, Machina is over 1,400 years, because it started its reign when the Kanem Borno Empire was under the Sifawa Dynasty. You know we have two dynasties in Kanem Borno. We have the Shehu Dynasty, which is currently the ruling family from the Shehu Elkanami.

“So the present Shehu is the 20th Shehu of Borno while ours, I am the 77th Mai Machina. You can look at the historical variation. So it is very difficult to give you the exact date or era when the snake thing started.