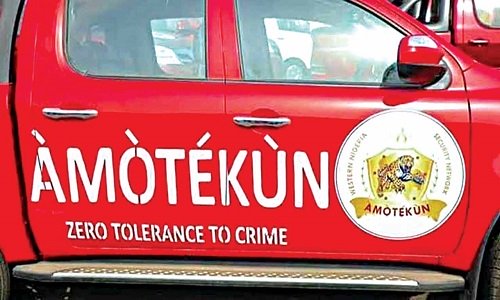 Houses of Assembly in the six Southwest states will on Monday simultaneously conduct public hearings on the Operation Amotekun Bill.

The speakers’ met a day after governors in the region met in Lagos with Inspector-General (IG) Mohammed Adamu and agreed on the security outfit.

They (speakers) agreed to meet with attorneys-general in the states after the public hearings in the states to review the contents of the bills.

The five paragraph statement reads: “After exhaustive deliberation, the Conference resolved that, as a matter of urgency, all the six Houses of Assembly should commence action on the process of passage of the Bill into Law.

“The Conference, also in this regard, mandated that all the Houses of Assembly should simultaneously hold public hearings on the Bill in their respective states on Monday February 24, 2020.

“The Conference of Speakers of Southwest State Legislatures urges all the people of South West to attend and make meaningful contributions to the bill that regulates protection of lives and property in our states.

“Thereafter, the Conference of Speakers will reconvene to meet with the States Attorneys-General to address all conflicting areas and to review the contents of the reports generated at the public hearings for harmonisation into the proposed law.”

Ondo lawmakers who were on recess have been asked to resume tomorrow to delibrate on the bill.

On Sunday, the Ekiti Council of Elders urged the governors not to politicise the recruitment of personnel into the outfits, warning that doing so could undermine their efforts.

The elders noted that the personnel for the security network would be critical to ending the rising wave of insecurity in the Southwest.

Addressing a news conference in Ado-Ekiti at the weekend, the Council’s President, Prof. Joseph Oluwasanmi, and the General-Secretary, Niyi Ajibulu, said the governors should look beyond party lines in recruiting people of impeccable character and integrity.

They said: “We must not allow bad eggs and politics to tarnish this great Initiative. The Council enjoins Ekiti Government and others to ensure that only people of impeccable characters and unquestionable past are appointed in the board of the security outfit. Also, the Amotekun personnel are to be carefully screened so as not to bring in persons or people that would eventually become impediment to the good intention of the whole idea.

“The Council dispels the fear in some quarters that the non-Yorubas in the Southwest are the target of the formation. Rather, the security outfit will enable the Yoruba to continue to be good and accommodating hosts they have been renowned for.”