This is coming 21 days after the tribunal delivered its judgement.

Adelabu and his party, APC, had challenged the declaration of Mr. Seyi Makinde by the Independent National Electoral Commission (INEC) as winner of the March 9 governorship election in the state.

In the notice of appeal filed on Saturday October 5, 2019, INEC, People’s Democratic Party (PDP) and Engr. Seyi Makinde were listed as respondents, while the appellants are the APC and Adelabu.

Among the grounds of appeal, as contained in the notice, was that the three-man tribunal headed by Justice Mohammed Sirajo, erred in its evaluation of evidence presented by the petitioners, and had in its judgment destroyed completely the petitioners’ petition.

The petitioners, who appealed against the whole judgment, said: “The honourable trial tribunal erred in law in dismissing the petition of the appellants, and truncated the rights of the appellants to fair hearing by the way and manner it reviewed and evaluated the evidence of the parties, thereby totally destroying the case of the appellants. ”

The petitioners said that Makinde was not duly elected by majority of lawful votes, adding that the election was marred by failure to comply with the provisions of the Electoral Act. 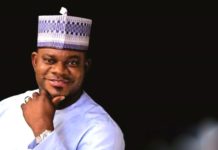