The Minister of Information and Culture, Alhaji Lai Mohammed has expressed optimism that the entire arbitration decisions and judgment debt of $9.6 billion against Nigeria by a UK court over a botched gas contract would be set aside.

The Minister stated this in London while reacting to Thursday’s ruling by a UK commercial court staying execution of the 9.6 billion dollar judgment debt and granting leave for Nigeria to appeal the decision in the UK appellate court.

A text of the minister’s reaction was made available to the News Agency of Nigeria (NAN) in Abuja by his media aide.

Mohammed noted that with the reprieve granted by the court, Nigeria has the opportunity to take appropriate steps to set aside the entire judgment debt in favour of an Irish company, Process and Industrial Developments Ltd (P&ID).

“We now have a fresh opportunity of arguing our case and even filing separate suit to argue that the entire judgment is set aside.

“As we have been saying everywhere we go, we have been compiling arguments that will make our case and position to set aside the judgment debt, an easy thing,” he said.

The minister noted that besides the victory in the court, the federal government delegation to the UK, had succeeded in changing the narratives of the case in favour of Nigeria, in the international community.

The government delegation included the Minister of Justice and Attorney General of the Federation, Abubakar Malami (SAN) and the Governor of Central Bank of Nigeria, Godwin Emefiele, the Inspector-General of Police, Mohammed Adamu and the Acting Chairman of the Economic and Financial Crimes Commission (EFCC), Ibrahim Magu.

“We came here with the sole purpose of not just winning in court but also winning in the minds of the international community.

“We started by visiting key media outlets, key business and financial groups such as Bloomberg, Financial Times, the Economists and others.

“I must say that over 24 major publications that published our stories are from our own viewpoints.

“What we are saying is that, until now, only the voice of P&ID was heard, only their own side of the story was heard but in the last four days our efforts in visiting the key media outfits and think tanks have paid off in changing the narrative,” he said.

Mohammed said the meeting with investors and other stakeholders had also helped to change the negative narrative that the case might hamper foreign investments into the country.

“Many of them at the meeting are investing in Nigeria and holding key positions in society.

“By the time we came out of the meeting, they had more empathy for our course and even many of them volunteered to serve our course in a very patriotic manner,” he said.

The minister recalled that prior to the visit, the plaintiff, armed with the court judgment, had been threatening enforcement by way of attaching financial and associated assets of the Nigerian state.

He said with the relief granted by the court, the harassment by the company and its handlers of compiling the nation’s assets for attachment would stop.

It would be recalled that the UK court had on Aug. 16 authorized P&ID, a little known Irish engineering and project development company to seize the 9.6 billion dollars, about N3.5 trillion in Nigerian assets over a failed contract.

The court ruling was a fallout of the botched 20-year Gas and Supply Processing Agreement (GSPA) and the subsequent award made in July 2015 in favour of P&ID, by an arbitration panel sitting in London.

The GSPA was purportedly entered into in 2010 between the Federal Ministry of Petroleum Resources and P&ID.

In the failed contract, P&ID was to build a gas processing facility to refine associated natural gas into non-associated gas to power the national electric grid.

On its part, the Ministry was to build a pipeline to supply gas to P&ID facility to be located in Adiabo, Odukpani Local Government Area (LGA) of Cross River state.

The agreement went sour because the company which did not build any facility at the agreed site blamed the Ministry for not constructing the pipeline for gas supply alleging that it had committed 40 million dollars into the contract. 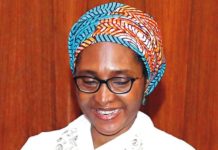 FG to focus on macroeconomic stability after COVID 19 crisis